Why GA4 isn’t ready for prime time. Yet.

Google’s latest web analytics offering, GA4, has been out in the wild for over a year now: long enough to change its name.  It is being improved all the time and recently introduced a 360 version.

The guidance from Google until recently, was that companies were advised to get GA4 set up on their site in tandem with their existing Universal Analytics (hereafter called GA3) implementation in order to get a feel for the new product, wait for new features to roll out and begin generating historical data for when the time was right to consolidate their tracking using only GA4.

This week, Google started to announce that the time is right to begin the switchover, with email and social media communications pushing the same message: 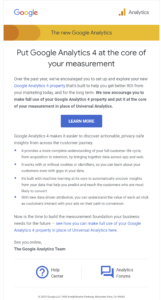 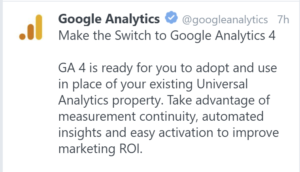 Is GA4 ready for prime time?

Whilst the list of pros begins to grow longer – including custom reporting such as funnels and segment overlap only available to GA3 360 customer being available in GA4, more robust pathing reporting etc – there are still some lingering cons.

These cons individually might be considered small enough to allow for certain sites to switch to GA4, but when added together mean most ecommerce sites would likely see a significant fall in data capture and analytical functionality.

Amongst these cons are:

So, implement GA4 and keep them both running for now.

In a few days I’ll post about what’s great in GA4 and how I’m starting to use it.